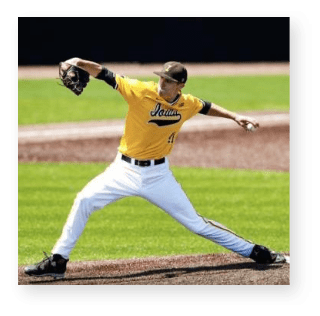 “The recovery and the whole overall process was better.”

At 24 years old, and just beginning a career in professional baseball with the Chicago White Sox, Ryan started experiencing a gradual, aching pain in his left hip. He decided to take a season off and really work on stretching and becoming more mobile, in hopes that this would resolve his symptoms.

As he was ramping up for spring training the following season, he started noticing that same hip pain returning. He would feel a deep pain as he released the baseball during a pitch. “My hip was so sore that I could not even finish my bullpens; it was that much pain,” says Ryan, “I knew I had to do something about it.”

Ryan went on to see the team doctor. After reviewing his X-rays, he was immediately diagnosed with FAI (femoroacetabular impingement) in both of his hips, with one being much worse than the other. Hip arthroscopy was the recommended procedure by his doctor. Ryan wasted no time deciding to go through with the operation on his left hip, as his career depended on it.

During surgery, the surgeon shaved down the bony overgrowth on the head of his left femur bone (the “ball” in the hip’s ball-and-socket joint) and repaired his labrum (the tissue around the hip’s “socket”).

“I rehabbed with the White Sox for an entire year, and it was intense,” says Ryan, “Six days a week, three to four hours a day, but that was my job at the time, to get better.” After a lot of hard work and determination, he was back up on the mound pushing himself to be the best pitcher possible. Ryan was extremely happy to finally be free of his left hip pain. However, Ryan ultimately decided to step away from the game he loved.

He transitioned to a career in technology sales, and unfortunately, that all too familiar ache began to occur in his right hip. “I’m a very active person, and I plan to be for a very long time,” says Ryan, “I was the quarterback for my flag football team, but after every game, I was sore for three to four days afterwards.” He knew it was time to get the operation done on his other hip.

Ryan knew exactly what to expect for his second procedure. Additionally, he had heard about a new technology for hip arthroscopy, the Pivot Guardian post-free distraction system. A couple of key benefits of this system were important to Ryan: a more comfortable boot design and the removal of a post between his groin. Therefore, he asked his doctor to perform his surgery with the Pivot Guardian system.

Fully prepared for another tough rehab, Ryan was pleasantly surprised. “The recovery, and the whole overall process was better,” recounts Ryan. “My first surgery I had ankle pain afterwards, and this time around I had none.” His physical therapist was amazed at how ahead of schedule Ryan was on his recovery.

Ryan has now had two successful hip arthroscopy procedures, and his advice to others is to ”listen to your doctor, follow the protocol, and be patient with your recovery. Before you know it, you will be back to doing the activities you were doing before the surgery.”

All surgery carries risk. See your orthopaedic surgeon to discuss your potential benefits and risks. Not all patients will have the same post-operative recovery and activity level. Individual results vary. 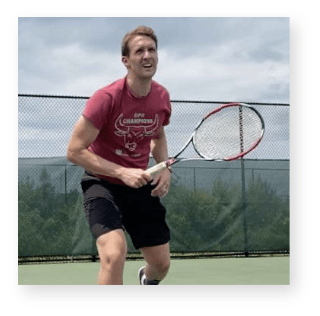 Hip arthroscopy is performed in individuals to treat joint disease resulting from conditions such as femoroacetabular impingement, labral tears, removal of loose fragments of cartilage inside the joint, inflamed joint lining or painful bone spurs.

Hip arthroscopy surgery is often not considered to be appropriate for patients with certain types of infections, compromised bone stock, skeletal immaturity, severe arthritis of the joint or excessive body weight.

Like any surgery, hip arthroscopy surgery has serious risks which include, but are not limited to, pain, infection, bone fracture, peripheral neuropathies (nerve damage), circulatory compromise including deep vein thrombosis (blood clots in the legs), heart attack and death.

The information presented is for educational purposes only. Speak to your doctor to decide if hip arthroscopy surgery is appropriate for you. Individual results vary and not all patients will return to the same activity level. It is important to closely follow your doctor’s instructions regarding post-surgery activity, treatment and follow-up care.

Stryker Corporation or its other divisions or other corporate affiliated entities own, use or have applied for the following trademarks or service marks: Pivot Guardian, Together with our customers, we are driven to make healthcare better. All other trademarks are trademarks of their respective owners or holders.

Our website was designed for a range of browsers. However, if you would like to use many of our latest and greatest features, please upgrade to a modern, fully supported browser.